I managed to recover from last night's debauchery at the Roller Derby bout [thank you Dayquil]. Again, big congratulations to all involved. We'll be back next year, bigger and better than ever.

Now on to the daily grind.

I know that Martha Stewart is an easy target for a lot of different people, whether it's her financial 'wizardry', her domestic perfection, or her general attitude.

But when she says stuff like this, you have to wonder if she's even a tiny bit self aware.

In an interview with Fortune Magazine, she talks of her plans to buy Kmart [the plan was referred to as Kmartha], and how she had planned to fire Donald Trump on her own reality show.

But the best stuff comes at the end, where once again my comic book geekiness gives me added insight.

After serving five months in jail for lying about a 2001 stock sale, which was followed by nearly six months of house arrest, the lifestyle guru says she feels resilient.

"I have learned that I really cannot be destroyed."

Ok, this is something that Dr. Doom or the Red Skull says. Or at the very least, you can't say something like this unless you have a volcano headquarters complete with death ray.

If you feel like you've grown beyond the traditional Trick-or-Treating, I'd like to extend an invitation to the final Dallas Derby Devils bout of 2005.

The lethal ladies of The Wrecking Crew will take on the scurvy wenches of the High Seas Hotties in a battle to the death.

There'll be performances by the bands Sidekick Mafia and Slick 57, and two different costume contests for the kids and grown ups.

I'll be repeating my role as a member of the broadcast crew giving the fans all of the action. As an added bonus, I've nearly learned all the rules.

Courage,
Mike G.
Posted by Unknown at 5:07 PM No comments:

I'll leave it to more experienced people to discuss the latest indictments and their consequences.

The story that surprised me today caught me completely off guard.

Apparently, Sulu has been boldly going where few men go.

It probably took a lot of courage for him to come out, and I hope the Star Trek Community continues to hold him in high esteem.

There's a site out there called The Truth Laid Bear. I guess you could call it a clearinghouse of current events blogging.

What makes it stand out is its unique ranking system that tries to mimic the ecosystem. If I understand it, your status depends on the number of inbound and outbound links. You start out as a microbe and strive to reach the position of Higher Being.

I was enjoyng life as a Flippery Fish, but I guess I haven't been doing my job, as I have defied logic and science by reverting to a Lowly Insect.

So please folks, add a Churn link to your site.

If you're a fan of the 'Odd News Story' you've probably seen a few involving possible overcharging by strip clubs.

I've had very few strip club experiences[and the ones I have had were subsidized] but I sort of understand the battle going on in your average strip club patron's head.

In a way, it's no contest. There is no greater sales person than a half-naked woman in a day-glo thong. Add some overpriced alcohol and an ATM machine that can make cash advances, and that's all she wrote.

But I'm not the only one commenting on this.

A former stripper penned a guest editorial for the New York Times, which you can read here.

Tips are always appreciated. Let her know how much you love her folks.

If you own a webcam without a flash, it's not a smart idea to bring it to a party where the combined light output is less than a 60 watt bulb.

Courage,
Mike G.
Posted by Unknown at 3:23 PM No comments:

I don't play chess, but this set might make me change my mind... 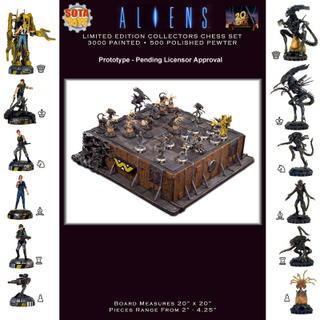 Available soon from your local house of Geekery.

Annoyance At The Speed Of Email...

In Churn's never-ending effort to make it easy for the reader to be disappointed with my writing, I've enabled Feedblitz on this blog. Feedblitz monitors RSS feeds, and sends you an email when they've been updated. It's great for those of you who don't have RSS readers or aren't online 23 hours a day.

Just look for the box at the bottom of the left-hand column. Enter you email address, and every night the system will check for new content, and send you a message if there is. No new content? No email. The really cool part is that since it's an email, you can get it on devices like smart phones and handhelds.

I'll be attempting to do some mobile blogging this weekend at the Wild Ass Wake.

I'm not a fan of horror movies, but I really dig the behind-the-scenes stuff, like Fangoria. I'll read all about SAW 2, but you couldn't drag me to the theater.

With the recent spate of zombie movies, I've been thinking about the different types of zombies you may come across, and how best to deal with them. There's the 'old school' Romero shamblers and the Rage-infected victims of 28 Days Later.

Do the zombies need simply the flesh of the living to survive, or do they need brain matter?

But this guy has me beat 5 ways to Sunday. From glancing through his book though, the prognosis is a bit grim. The sad fact is when dealing with zombies, the numbers just don't add up in our[non-dead] favor.

One final hint? Don't bother with using fire as a weapon. Not only will you still have zombies, but now they'll be on fire.

Courage,
Mike G.
Posted by Unknown at 1:41 AM No comments:

So I read that making potato pancakes is a good way to use leftover mashed potatoes.

I think I may have missed the part when they advised against using instant mashed potato flakes.

It wasn't a total loss, but then again my cooking skills have left me with the inability to differentiate between 'blackened' and 'burnt'.

To chill your soul.

Sources tell me this is from the Family Guy direct-to-video movie.

I guess times have changed.

Courage,
Mike G.
Posted by Unknown at 3:21 PM No comments:

We've been in a semi-state of mourning here at Churn for the demise of the Wild Ass Circus.

What especially stung was the fact that the show was cancelled mere days before the third anniversary, which was to be a star studded affair with former guests of the show gathering to share memories.

But Richard, never one to give up on a good idea has decided to soldier on with the party, turning it into the Wild Ass Wake: 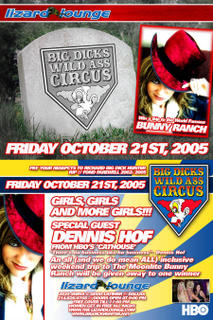 You can see the full size version at my Flickr Page. Everyone's invited, and we hope to see you there.

Courage,
Mike G.
Posted by Unknown at 3:21 PM No comments:

The Reality Sinks In...

So Bro. Mike, Richard and I were watching No Mercy earlier tonight when it hits me: we don't have a place to discuss this PPV on the air anymore.

I felt bad, not just because my only media outlet is gone[which does suck], but the fact that each month there was at least one person who maybe didn't like wrestling, but appreciated the way we discussed it in a completely serious manner.

Speaking of wrestling, there's still time for you to join our WWE Fantasy Wrestling League. Just click here and sign up before Monday Night RAW. Once you have a team, click on the Create/Join League link and enter WildAssCircus to join our league.

A small dining suggestion for the Dallas audience.

Depending on where you live, finding a locally owned restaraunt can be difficult. Finding one that serves good food at a decent price is almost impossible.

Enter Highlands Cafe. I had lunch there today, and thought it was great. I had their 1/3 lb. hamburger [no tomato, no lettuce] with some of the best french fries I've ever had. Crispy on the outside, and steaming on the inside.

I've yet to sample the desserts, but give me time.

Of course, I don't expect you to take my word for it, so here's what the Dallas Morning News says. For those who shy away from 'corporate media', the alternative weekly paper Dallas Observer liked it enough to name it in their yearly Best Of issue.

Oh, for those wondering, the lovely lady featured below is Motor Lisa, captain of the Suicide Shifters. She's usually in a much sunnier mood.
Posted by Unknown at 12:08 AM No comments: Motor Lisa...jpg
Originally uploaded by thesporq.
Posted by Unknown at 3:25 PM No comments:

From "Volunteers" by Jefferson Airplane:

Now please click here if you will. I'll wait for you to come back.

How exactly does a song with words like Revolution and 'marching to the sea' put someone in the mood to buy a $60 fleece pullover?

Courage,
Mike G.
Posted by Unknown at 2:35 AM No comments: