First off, a huge thank you to everyone involved in making my trip to Dallas so memorable. Seeing old friends and getting back into the ol' announcer's booth was a real treat, and hopefully I'll be able to make it back very soon.

As for Devin's last post, I promise to have an adequate response very soon. Until then, since Churn is the place where Internet Memes go to die, I'd like to quote an article written a few years ago by Kieth Martin:

If we accept all the Star Wars films as the same canon, then a lot that happens in the original films has to be reinterpreted in the light of the prequels. As we now know, the rebel Alliance was founded by Yoda, Obi-Wan Kenobi and Bail Organa. What can readily be deduced is that their first recruit, who soon became their top field agent, was R2-D2.

What then follows is an inspired piece of writing that makes a little too much sense. You can read the rest of it here, if you haven't already.

Courage,
Mike G.
Posted by Unknown at 9:04 PM No comments:

It was really great catching up with Mike G. when he came back to Dallas last weekend. After getting him his celebratory Jamba Juice, we tooled around a rainy city talking about ... well, damn near everything.

Over the course of the weekend, i busted out my iPod and played the Patton Oswalt bits from the "Last Laugh 2006" Comedy Central special, and he showed me some wrestling videos on his Creative Zen player. It was the first time I had screwed around with a Creative player, and I have one big problem with it: the interface. The buttons aren't uniform in how they... work. This button works to get you here, but its counterpart doesn't work to get you in the opposite direction. VERY non-intuitive.

However, I think I have the answer to get Mike to finally give up all of the imitators once and for all:

It's a transforming iPod Dock that converts from tune-blasting robot into an 18-wheeler. The dock is licensed by Apple, and is available for pre-order now for $144.99 from BigBadToyStore.com.

Now, I know what Mike's thinking: the REAL reason he doesn't have an iPod is they're so damned expensive. Big deal. When will you ever see a Transformer dock for the Creative players? Or, bog help 'em, the Zune? That's right, you won't.
Posted by JustDevin at 9:40 AM 1 comment:

The Art Of The Gag Reel

When Katie Sackhoff or Dean Stockwell screws up a line and swears, that's cool. Your brain can process that.

But when Edward James Olmos does it... well, something short circuits for me.

This may or may not get you ready for Sunday's return of 'Galactica,' but it certainly pulls back the curtain.
Posted by JustDevin at 8:34 AM 1 comment:

Is This A Pun? 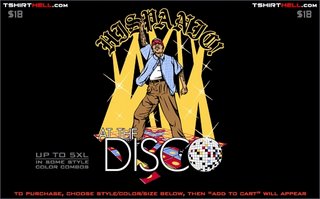 Courage,
Mike G.
Posted by Unknown at 9:32 PM No comments:

Throwing Meat To The Wolves...

So, remember Devin's post a short while ago about a particular robot girl exposing her... operating system for all to enjoy?

Well hold on to your...actually, I don't want to finish that sentence.

May the Kittens forgive me,

Yeah,
I guess it did really happen.

Courage,
Mike G.
Posted by Unknown at 9:10 AM No comments:

That didn't just happen, did it?

I'm So Pretentious, I'll Use TWO Initials In My Name

As a rule, geeks are grumpy.

Sure, they follow their particular favorite movie / TV show / comic book with slavish devotion, but their future experiences with said favorite thing are colored by the "newness" of the first time.

James Cameron avoided the dreaded and feared geek backlash by making a completely different movie in 'Aliens' than Ridley Scott did in 'Alien.' (Of course, I can imagine the reaction in pre-production if the movie were released in the time of the Web: "Cameron's just a low-budget hack. 'The Terminator' was cheesy, and he'd be better off sticking to that low-grade horror genre, rather than screwing up the greatness of Scott's claustrophobic vision!") Every film since then has been either poorly written (Alien3), or poorly directed (Alien: Resurrection), or both (Alien vs Predator). At least you could point to the pedigree of the two direct sequels -- David Fincher, Jean Jeunet, Joss Whedon. With 'AvP,' you has Paul W.S. Anderson. [shudder]

And here's the real kick in the crotch: 'AvP' KILLED at the box office, bringing in $171 million worldwide. So, being the money-grubbing whores Fox is, they're denying us a real return to the 'Alien' realm we've been craving, and instead, giving us more pap with 'AvP2.'

Two things give me hope about this flick:

So, let's take a quick review of Devin's contributions so far to the Churn Nation:

Such As: Kittens Everywhere Cringe In Terror!

Word around the campfire is that Tricia Helfer, known to all the citizens of Geek Nation as Number Six from SciFi's Battlestar Galactica, will have a photo shoot in next month's Playboy.

Anything I could type next would come off as a horrible double entendre, so I'll leave that up to you.

First, a quick 'hello' to the Churn! faithful. Mike G. gave me a key to the place, wanted me to water the plants, and make sure no one's broken in and set up a meth lab or anything of the sort.

Next, pretty much every time I talk to Mike, he tells me how excited he is about the Transformers movie. I know this will likely get me tossed out of his blog as fast as I got invited, but I simply missed the boat on the Transformers.

But Transformers? Nope. Does nothing for me.

I don't know why -- you would think the robots in disguise would have been right in my wheelhouse. But, for whatever reason, Optimus Prime holds no special place in my heart.