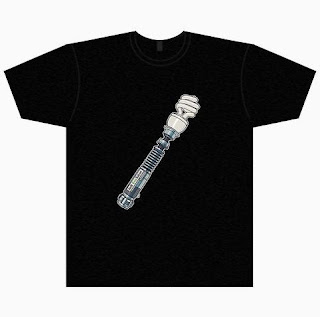 Thanks to the folks at Gizmodo for finding this shirt and Redbubble for making it.

May the [environmentally responsible] Force be with you.

Courage,
Mike G.
Posted by Unknown at 8:14 PM No comments: 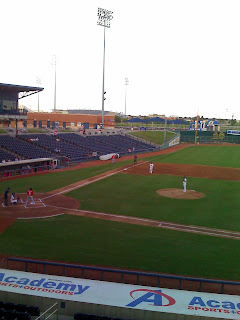 Thanks to the fine folks at both Jayski and E! Online for this news.

Apparently Travis Kvapil, driver of the #26 car in the NASCAR Sprint Cup Series will have his Ford Fusion decorated in a KITT-inspired paint scheme to coincide with the series relaunch on NBC. Pictures located here.

Sadly, I don't think NASCAR will allow the race team to install that swooshing red light in the on the front of the car.

Or even let William Daniels act as crew chief.

Too much Blog neglect. Will do better.

Just wanted to forward a neat piece of info about my hometown. Our Central Hockey League team, the Odessa Jackalopes [now in its 11th year] has become an affiliate of the New York islanders. [press release here.]

I love this. Not so much for the players who may go from the Jacks to the big time of the NHL[I don't think we'll have many Hometown Heroes], but for the guys who may be on the opposite track. It might be a bit jarring to go from the Nassau Veterans Memorial Coliseum with seating for over 16,000 to the Ector County Coliseum that seats a shade over 5,000.

But then it is Long Island.

P.S. Mockingbird was a Skrull?! Crap. Now Hawkeye's gonna go all Punisher on us.
Posted by Unknown at 12:18 AM No comments: