Now that was a shindig.

CAN'T STOP THE SERENITY 2007 wrapped up in the wee hours of the morning, and the early returns indicate that this years total will demolish the mark set in 2006.

Massive thanks to everyone involved, from the special guests to the folks who lended a hand just because.

Pictures and video will be along shortly.

Dev, Tara, Manda, April, Cedric, Jane, and too many more to list:

Thanks for doing the impossible.

Posted by Unknown at 9:14 PM No comments:

I'm in Dallas, and at a computer in the lobby of my hotel.

How's that for an update?

I managed to get a little time off and thought, what better way to spend it than to be an unpaid volunteer for a charity movie showing?

In less than 24 hours, my good friend Devin will be hosting one of over 40 nationwide showings of the movie Serenity. All proceeds will benefit Equality Now, an organization dedicated to equal rights for women. You can learn more here.

So for me, it's a few hours sleep, and then back to work.

P.S. Watch the Twitter box on the side of this page for updates throughout the day.
Posted by Unknown at 1:46 AM No comments:

It was just supposed to be your average visit.

I'd been through the drill before:

My main concern was that my prescription would be so strong I'd be able to see a few minutes into the future.

But I didn't expect what happened next.

The doctor told me not to worry...the puff test concerned him a bit, so he was scheduling another test.

A few days later, I took the second test. The results...weren't comforting.

I got sent to a specialist. After some more futzing around with my eyes, the verdict was in.

[You can lean more about Glaucoma here and here.]


To my credit, I didn't immediately fall to my knees and curse my Creator; nor did I revert to the fetal position and go catatonic. My doctor, who had no doubt done this many times before, laid out my options.

I could go with eyedrops, which I would have to take for the rest of my days.

Or, I could undergo Selective Laser Trabeculectomy. The major advantage to the laser treatment is the fact the effects could last for up to five years.

I'm honestly not sure why I'm writing about this. It's not for the attention[I think]. I could have easily sent out an email to my friends. I guess I don't want anyone else going through that shock. If I hadn't gone in for new glasses, I wouldn't have ever found out, and since Glaucoma has no symptoms, by the time a person's vsion is truly affected, it might be too late. And it's not just the elderly who have it either. Bottom line: Get Tested.

Unfortunately, I have lost some peripheral vision, but the SLT will help me keep the vision I have. It's a good thing, too.

There's a bunch of stuff I haven't seen yet.

So, earlier this evening I was enjoying some Nacho-y goodness[special thanks to the fine folks at Penzeys Spices and their excellent Bold Taco Seasoning]

As I reached for some more tortilla chips, I noticed something written on the bag: a statement declaring that these chips would go perfect with their brand of salsa[Tostitos].

At first, I just chalked it up to the crass commercialism/synergy/vertical integration we get blasted with on a daily basis.

But then[and this may have been a mistake], I started thinking.

Tostitos' parent company is Frito-Lay, makers of everything from Cheetos to Rold Gold pretzels. They've created flavors and color combinations that don't exist in nature.

Which brought me to my hypothetical question:

What if the reason Tostitos Salsa went perfect with Tostitos chips was because it was designed that way?

Look, there's all kinds of additives out there. Stuff to keep food fresher, stuff to keep cereal from getting soggy, stuff to keep seasonings from clumping together. Is it really that far a stretch to think that the idea hasn't crossed somebody's mind? I figure Chemical A gets sprayed on or mixed in the chips, and is set to react with Chemical B in the salsa. When they meet, maybe they add an extra hit of spice, or make the salsa a bit thicker.

I know this sounds insane, but I can't help but think this is the sort of thing marketers dream about.

You know, before blogging, I'd usually tell all of this stuff to my imaginary pirate friend.

Sadly, Mr. Jenkins never understood why he never got any offers on his parcel of land: 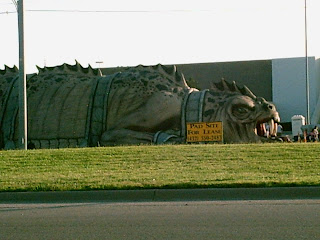 Actually, I saw this outside our local mall the other day. Apparently there was some sort of Bounce House arms race that I was not aware of. Off to the side of this lizard was an even bigger giant lying on his back. Kids entered a gaping hole in his head . Cheery.

Also in the mix was the always appropriate Titanic-themed slide and one with some sort of tornado with a face.